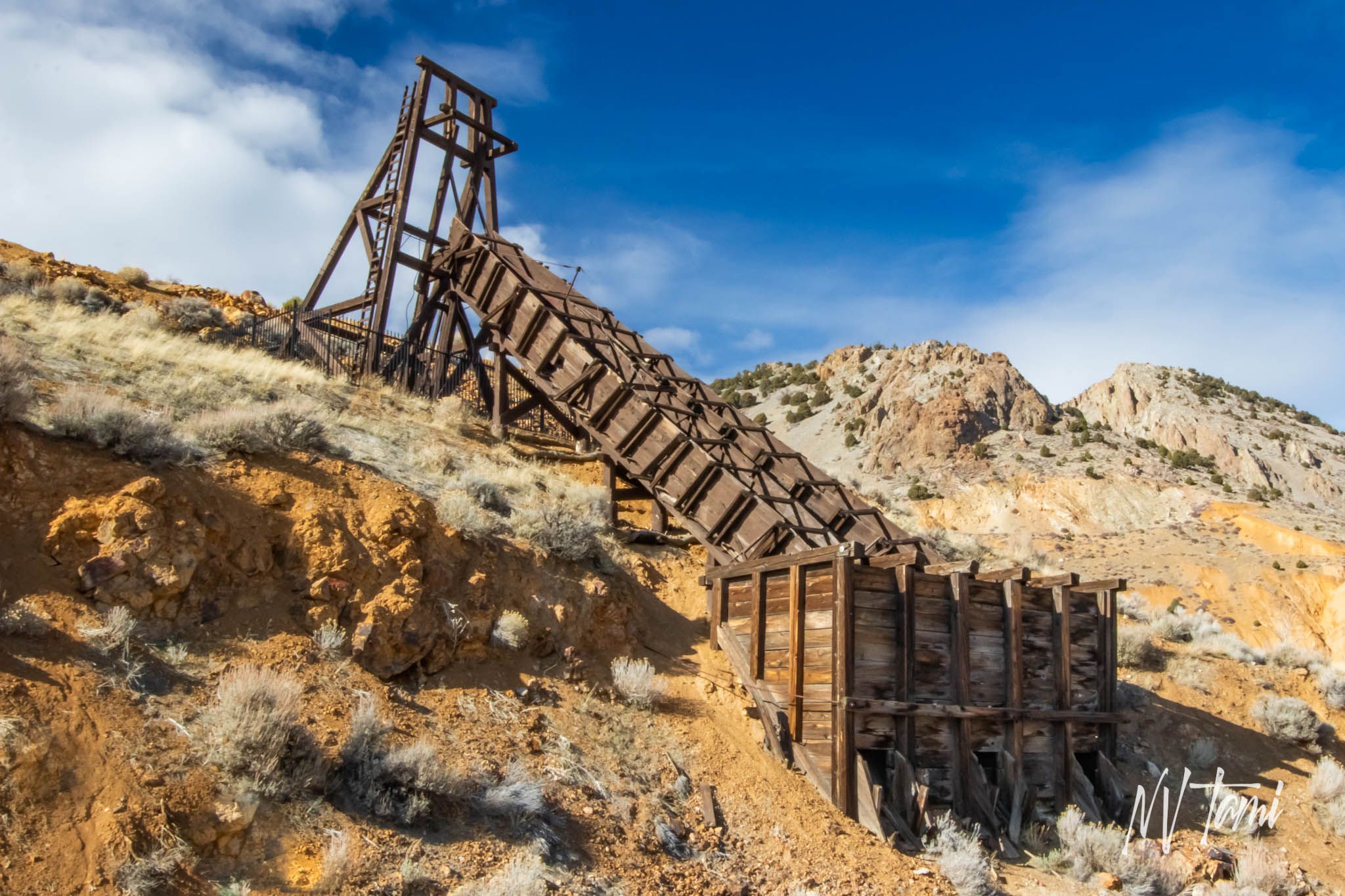 Part of Nevada’s undeniable charm and appeal is its rich history. And while we can’t physically go back in time to experience the Wild West and Gold Rush, there is an opportunity to view the Silver State’s past. Sprawled across the vast landscape of Nevada are a number of ghost towns—filled with ruins, cemeteries, abandoned mines, and some still largely intact. These historical gems are portals into what Nevada once was and are worth investigating. Here are ten Nevada ghost towns you should check off your bucket list.

Located on the edge of Death Valley, the town of Rhyolite once housed 10,000 residents at its peak. Founded in 1904, the town didn’t last long, with the last known resident dying in 1924. Although it was once the most prosperous town in the region, now only a few of the more than one hundred original buildings still remain. Now Rhyolite is known as one of the most haunted ghost towns in America—with people claiming to hear voices echoing through the decaying buildings. Hundreds of visitors and witnesses have reported paranormal experiences here.

The most famous ghost tale is of the spirit of a gold prospector who died in the town after he brought in a large load of gold nuggets to be appraised. Folklore says he was poisoned by the barber, who then stole all the gold. The ghost has been said to appear as a brown shadow with a big floppy hat and wanders around town.

Virginia City is one of the most famous western towns for its popularity during the Nevada silver boom in 1859. The city grew to over 25,000 residents by the 1870’s and produced one-half of the nation’s silver up until 1886. Unfortunately, only a few benefited from this as corporations were necessary to exploit a resource requiring an immense, complex infrastructure. Now Virginia City one of the most popular ghost towns for visitors wanting to experience experience paranormal activity.

The most popular hot spot in Virginia City is the Washoe Club, which back in the 19th century facilitated prostitution and other illegal activity. Three known entities are said to lurk the staircases and rooms of the Washoe Club: a young girl who was killed in the basement, a bland prostitute who was murdered in one of the third floor rooms, and the man who killed the prostitute on the third floor, who then took his own life.

The discovery of Pioneer mine changed Nye, Nevada forever. A camp formed in 1908 between the Pioneer mine and the Mayflower mines already in existence. It grew at an astounding rate and had a population of 1,000 residents by 1909. A post office opened in March and Pioneer officially became a town. A fire that swept through the tinder-dry wood buildings in 1909 devastated this once booming town. Although the town was partially rebuilt, the fire ultimately started the demise of Pioneer.

The mine partially collapsed in 1914 and was forced to shut down along with the mills. The reopening of the mine in 1915 lifted Pioneer, but not enough to restore the town. Activity continued in Pioneer until 1931 when it was no longer profitable to continue operations. Mining equipment is left behind and still available for viewing to this day.

Unlike some of the other booming ghost towns of Nevada, Gold Point, originally named Hornsilver, never took off as its founders had hoped. In 1929, the silver market offered nothing but bad news, which is why investors chose the name Gold Point instead. At one time, 2,000 people occupied this small town, but legal troubles confronted the operators. The lack of resolutions ended up causing the demise of Gold Point. However, Gold Point was never officially abandoned.

The population is generally 7 to 10 full time residents at anytime. The town is now owned by Herb Robbins, also known as Sheriff Stone. There are a number of abandoned ranches in the area and a few old buildings still remain. If you feel compelled to, you can even stay at the Gold Point bed and breakfast, known for its delicious hamburgers and a small slice of mining history.

Palmetto was established in 1866 when silver was discovered. A 12 stamp-mill was constructed but there was a lack of ore. The town never stood a chance and was abandoned the same year it was established.

In 1906 mines were reopened and the city was given a second chance. The town held more promise this time around—it had restaurants, a post office, a doctor’s office, and many saloons and assorted shops. But again the town didn’t last long, when it was abandoned less than a year later for other more profitable sites. In 1920 a third attempt was made and the town was reopened yet again, however the third time wasn’t a charm either. The townsite is completely abandoned today.

Today, nothing is left of Palmetto except for ruins. Long live Palmetto, the town that never could make it despite its every attempt.

Goldfield may now be filled with boarded-up windows, bars across the doors, and other means of keeping people out, however it was once a town that was very much alive. Founded in 1902, Goldfield once had a population of 30,000 during is boom year of 1906 when it produced $11 million in gold. It was also known for having the longest bar in the history of mining towns. Its bar, Tex Rickard’s Northern, was so long it required 80 bartenders to serve its customers.

The town died out by 1920 and became known as one of the most haunted ghost towns in the wild west. The Goldfield Hotel has become a popular site for many ghost hunters—said to be ha

Haunted by the spirit of a prostitute named Elizabeth. George Wingfield, hotel owner, had grown fond of Elizabeth, and upon finding out she was pregnant with another man’s child, became so infuriated he chained Elizabeth to the radiator in room 109.

According to Spirits-Speak.com, “There she stayed supplied with nothing more than food and water until she gave birth, at which time it is said that George took the baby and threw it down an abandoned mine shaft. The same mine shaft that the hotel is said to be built on. After the birth of the child, Elizabeth vanished, never to be seen or heard from again. To this day it is said that room 109 is still haunted by Elizabeth.”

The discovery of Ruby Hill in 1869, prompted the setup of a small mining camp by the early 1870s. By 1873 a post office was opened. In 1875 the Ruby Hill Railroad began operations—used primarily to deliver ore to smelters in nearby Eureka. By 1878, Ruby Hill had a population of 2,500 and two newspapers. By the 1880s, mine production began to falter, driving residents out of Ruby Hill. By 1885, only 700 residents remained. Population continued to decline over the years and the post office finally closed in 1901.

Ruby Hill is now a private property and permission is required to visit this historic town. There are no signs that specifically posting “Not trespassing” at the front gate, however several buildings are posted. The old Ruby Hill Mine and Mill are still around to date.

Ruth was built in 1904 by the Nevada Consolidated Copper Company. Its biggest years were 1909 and 1910 with a population of more than 500 residents. Ruthtown was big enough to warrant a two-story hospital, bunkhouses, and boarding houses for the residents of the town. Ruth, unlike some of its fellow Nevada ghost towns, banned bars and was therefor a quiet town. Ruth continued to prosper and grow and by 1928, the town had a population of 2,200 and an impressive business district.

By 1958, Kennecott gained complete control over the Ruth mines. The old town was moved to a new site to allow for the expansion of the open-pit operation. The mines have been operating intermittently during the past few years and as a result, Ruth lost most of its population. The mine reopened in 2004 and continues operation to this date, making this no longer a true ghost town. In 2000, the population of Ruth stood at 506.

The drought in the Western part of the United States was good for one thing—it emerged the once submerged ghost town of St. Thomas from the depths of Lake Mead. Founded in 1865, St. Thomas was initially settled by Mormons. When the Mormons left in 1871, outlaws—including horse thieves and cattle rustlers—made this town their home. The town was eventually settled by people attracted  by the region’s prime farming land and became a key stopping point between Salt Lake City, Utah, and Los Angeles., California. However, the town’s downward spiral started in the early 1900s, when the federal government decided to build a dam to harness the power of the Colorado River, thus prompting westward expansion and large-scale immigration.

In 1928, President Calvin Coolidge signed a bill authorizing the building of what would become known as the Hoover Dam. St. Thomas residents were ordered to relocate. The last residents of St. Thomas were forced to leave in June of 1938. Today you can still see the steps of the local schoolhouse and the wall of the St. Thomas ice cream parlor. Visitors are free to explore the area but are prohibited from touching or moving any objects left behind by residents long-ago.

1865 showed much promise in Lincoln County, when a number of mining camps came to life in an area known as Pahranagat Valley, an Indian word for “Valley of the Lakes.” There were twenty-six small silver mines in the valley in 1866. William Raymond purchased some of these mines, built the first mill, and laid out a townsite, naming it “Hiko”, an Indian expression meaning “white man’s town.” Hiko attracted a few hundred residents but by 1871 the mining activity west of Hiko had begun to die out.

Today, Hiko still exists on state highway 36 just north of the junction of state highway 25. The only things that are left standing in Hiko are the 1901 J.F. Murphy general store building and the cemetery. It is also known for its Alien Research Center, which doesn’t actually participate in any actual alien research. Instead there are plenty of extraterrestrial t-shirts, X-Files posters, and a giant metal alien outside to satisfy your inner nerd.

Have you visited any of these Nevada ghost towns? Which would be first to visit on your bucket list?

10 Must-Haves When Packing for Havasu Falls

10 Reasons to Take a Hike On Vacation