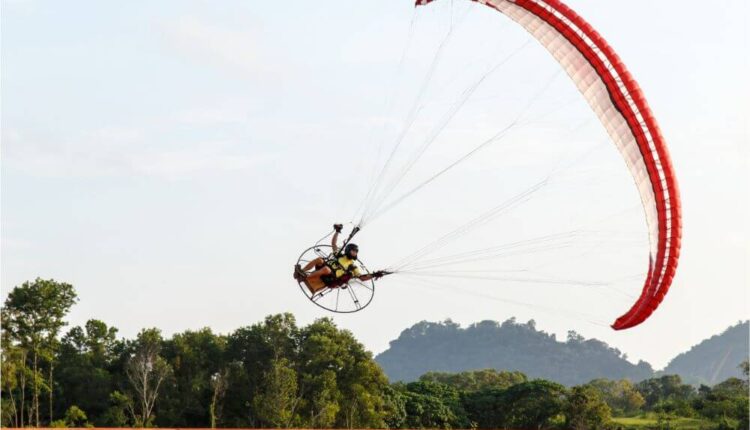 When it comes to airborne activities, a paramotor is perhaps one of the coolest things you can get. For those of you who don’t know, paramotors are also known as powered paragliders.

Technically speaking, the paramotor is the propulsion mechanism and the harness that is attached to the paraglider wings. However, in common terminology, the whole unit is called a paramotor.

If you know a thing or two about paramotoring, you know that it can definitely be quite exhilarating. With that being said, to enjoy these awesome machines, you first have to buy one. So, how much does a paramotor cost? You can expect an average paramotor to cost you somewhere under $10,000.

However, there is a bit more to it than that. Below, we want to discuss all of the factors that will determine how much an average paramotor costs. Keep in mind that purchasing the machine itself is not the only cost you will have to incur here.

There is other equipment you have to purchase, training that you will have to go through, maintenance costs, and more. We don’t just want to talk about the cost of the machine itself, but your total costs in general. Let’s figure out exactly how much the awesome sport of paramotoring is going to cost you.

How Much does a Paramotor Cost – The Average Cost

To be clear, here we are looking at simply the paramotor mechanism itself. We aren’t talking about the wings, the helmets, the other gear, your training, or anything else.

So, for your average paramotor, a new one, you can expect to spend just over $8000. Almost 60% of all new paramotors out there that you can purchase will fall into a price range between $1000 and $8000.

If we are talking about used paramotors, you can expect to spend somewhere just under $6000. Depending on where you go, you may be able to find a decent used paramotor for somewhere around $3000.

OK, so now we have taken care of the paramotor itself, but there is a lot more required here. As mentioned above, technically speaking, the paramotor is just a motor and the harness. Wings, helmets, training, and more, are all required too.

The Cost of Paramotor Wings

In order to achieve lift, you do also need the wings. You can’t fly a paramotor without a wing. There are many different kinds of paramotor wings out there, and different brand names too.

The wings are of course important, and there are a few vital factors to pay attention to here. First and foremost, the type of fabric used in the construction of the wing is very important.

You also want to determine about how long the wing can be used for before it needs to be replaced. For the record, your average paramotor wing is going to last for roughly 400 hours of flight.

Another thing you want to pay attention to is that the wing in question is certified. Wings that are uncertified, although technically may be usable, are not the safest option. If you are going for maximum safety, always go for certified wings.

On that note, you also really don’t want to cheap out when buying paramotor wings. Sure, cheaper wings might be good for your wallet, but they’re also lower quality and can be dangerous. We definitely recommend going for one of the trusted paramotoring brand names.

If you buy a brand new wing, a beginner wing, you can expect to spend somewhere between $2500 and $4000. This is especially the case if you go for a trusted and high end brand name.

If you are going for something like a modern and high end reflex wing, you could spend up to $5000 or more. On the other hand, you can find cheaper models, especially if you go for something used. You might be able to find a decent used paramotor wing for anywhere between $1500 and $2000.

The Cost of Paramotor Equipment

You now have your paramotor and the wing. There are now some other costs that you need to consider, mainly paramotoring equipment. The three most important things that you absolutely will need to purchase here include radios, a reserve parachute, and a helmet.

In terms of the helmet, you can expect to spend anywhere between $200 and $500. Just make sure that the helmet in question is highly rated and certified. Generally speaking, you do want to go for a slightly more expensive helmet that has some quality assurances.

You are then also going to need a radio. A radio is so you can communicate with people on the ground, and to call for help in the event of an emergency. You can expect to spend between $150 and $250 on a decent radio.

What you will definitely need is a reserve parachute. You can expect to spend anywhere between $800 and $1300 on a reserve parachute. There will also be some parachute repacking and other costs that we will discuss further below. Worst case scenario, these three pieces of equipment will cost you somewhere around $2000.

The Cost of Paramotor Training

Something that many people don’t realize is that to go paramotoring, you need to have training. This is actually one of the very first costs that will come your way. The fact of the matter is that paramotoring is not easy, and it’s also fairly dangerous.

After all, you will be suspended several thousand feet in the air by a piece of fabric. You need to know how to control a paramotor, where you are allowed to fly, and more. While it’s not quite an airplane, a paramotor does still take skill and training to fly.

Some training schools might be able to train you in a single day, although most will require a few days of training. You can expect to spend somewhere around $2000 on average paramotor training. However, depending on where you go, it could cost anywhere between $1500 and $3000.

The Cost of Paramotor Inspections

Besides the fabric being in bad condition, there are other problems that these paramotoring wings can suffer from. It is simply not worth the risk to neglect these yearly inspections. Things like porosity, line length, line strength, and symmetry are all important to inspect.

When it comes to your life, it’s definitely worth the money. This is especially the case seeing that a yearly wing inspection and servicing is going to cost you somewhere between $100 and $150. It’s really not that expensive considering that your safety is on the line. Of course, if there is a lot that needs to be fixed, then you will have to pay more.

In terms of repacking your reserve parachute, this is something else that needs to be done on a yearly basis. This has to be done in order to ensure that the parachute is still in working order.

It also needs to be done to ensure that if you ever need it, the parachute will open. You can expect to spend anywhere between $40 and $75 to have your reserve parachute repacked. 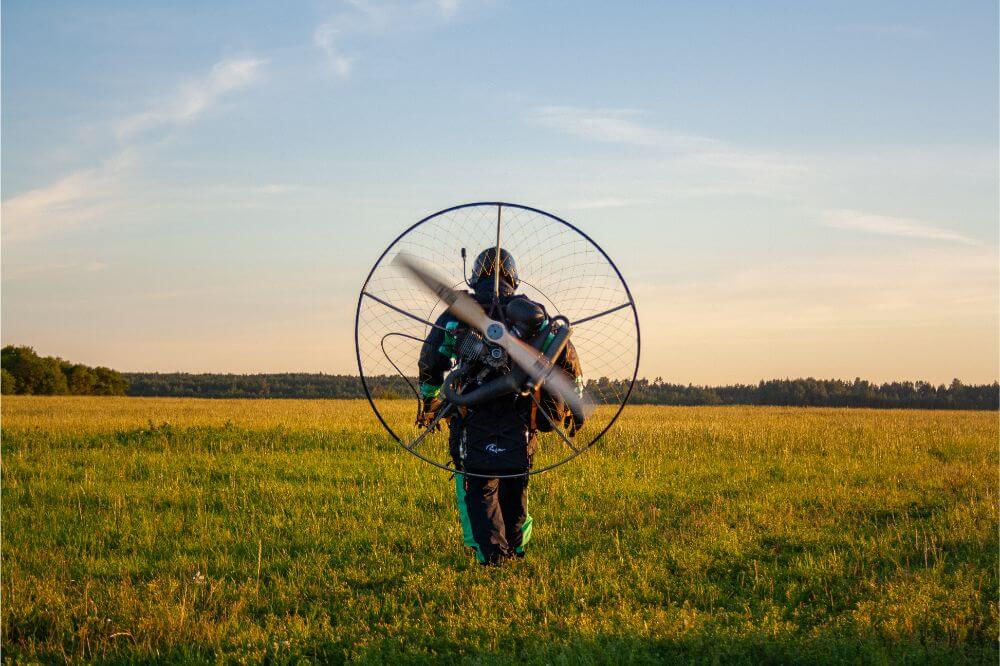 How to Choose the Right Paramotor

Right now, we want to go through a little paramotor buying guide. We want to go over all of the most important factors you need to consider when purchasing a paramotor. At the same time, these factors will also work towards determining the overall price of the paramotor itself. Let’s take a look.

One of the most important considerations to make here is what type of engine you want to go with. Paramotors usually come with either two-stroke engines or four-stroke engines. There are a few big differences that you need to consider here.

That said, if what you are looking for is power and speed, then it is a two-stroke engine that you need. Moreover, 2 stroke engines also have a much simpler design that make them much lower maintenance and easier to fix when required.

Yes, there are then also paramotors that have electric engines. These are fairly cost-effective and low maintenance, although they just aren’t very powerful or fast.

The other thing to consider here is whether you want an engine that has a clutch, or a non clutched engine. With an engine that does not have a clutch, the more you rev the engine, the faster it spins. Moreover, the prop will start to spin once the engine is started.

The only way to turn the propeller off in this case is to shut the engine off. Non clutched engines are great for pilots who want to engage in thermalling. They can also be a bit safer when it comes to landing. If you want less aggressive and slower power delivery, then an engine with the clutch is what you need.

Another thing that you need to consider here is the size of the prop or the propeller. Paramotors come with various propeller types. Some feature two blades, some three, and some four blades. Moreover, these blades can range anywhere from 115 to 160 centimeters in length.

Generally speaking, the more thrust and forward momentum you want to generate, the larger this prop should be. Of course, this will add some weight to the mix, but it is generally worth it. Larger props create more speed.

Something else that you need to think about here is how heavy the engine is. Do keep in mind that both during the landing and during the takeoff, you have to hold all of that weight up. If the paramotor is too heavy and your legs buckle underneath, you could injure yourself or cause damage to the paramotor.

Therefore, if you have back or leg problems, a lower weight model will be best. For instance, if you get a model with a 3.5 gallon tank, keep in mind that the fuel itself is going to weigh nearly 25 pounds. Also keep in mind that paramotors can weigh anywhere from 40 pounds to 75 pounds.

However, do keep in mind that an electric start feature will add anywhere between three and five pounds to the equation.

Yet another important feature to look out for here is the strength of the frame. If you are a beginner, you definitely want to go with something that has a tough frame. Frames that are made out of very thin tubes are definitely not good for beginners.

One cool thing to look out for here is an aerodynamic frame that is shaped like an aerofoil, as they don’t have much drag. Frames that feature very streamlined fuel tanks are also ideal as they help to reduce drag. When purchasing a paramotor frame, also consider how easy the replacement parts are to attain.

You should now know roughly how much a paramotor is going to cost you. At the higher end of the spectrum, you’re looking at around $20,000 for the paramotor as well as all other components.

Are Side-by-Sides Street Legal in Texas?

How to Make a UTV Street Legal?