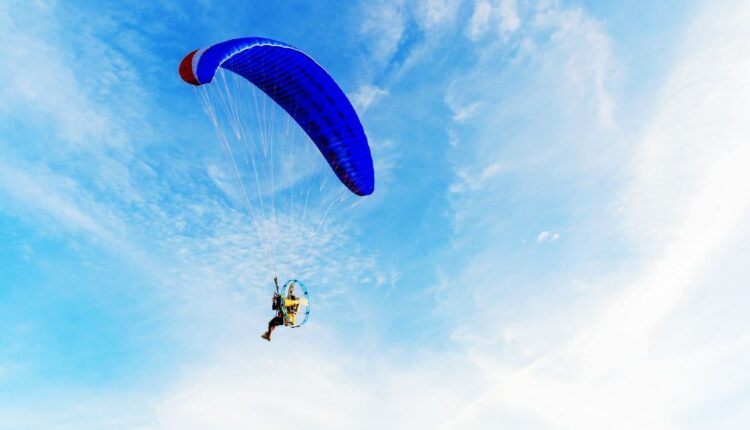 That said, what many people do wonder is, how fast can a paramotor go? Technically speaking, paramotors have the ability to travel up to 75 kilometers per hour. That is roughly 46 miles per hour. That said, as we will discuss below, you probably won’t ever achieve that kind of speed.

Right now, we want to take a closer look at the average speed that a paramotor travels at. Moreover, we’re also going to talk about the various factors that will affect paramotor speed. Let’s talk paramotor speed and everything you need to know.

As mentioned above, a paramotor does have the ability to travel at up to 46 mph or 75 kilometers per hour. This is especially the case with high-end modern paramotors.

That said, you probably won’t ever be able to achieve this speed. So, let’s take a closer look at the average speed that a paramotor travels at, as well as the factors that affect it.

The average speed that a paramotor travels is around 30 miles per hour. This is roughly 48 kilometers per hour. Yes, of course, they are quite fast. That said, there are a variety of factors that will affect exactly how fast these paramotors can travel.

The type of paramotor, rider weight, wind, and more can all have an effect at the speed after which a paramotor can travel.

Further below, we will take a look at all of these factors that influence paramotor speed, and more. However, before we get to that, we do want to talk about the rules surrounding paramotor speed.

Ultralight Aircraft Flight Rules in Regard to Speed

What you need to know here is that there are some regulations in regards to exactly how fast a paramotor is allowed to travel. First and foremost, it is important to note that the main regulatory body here is the FAA or Federal Aviation Administration. This is the agency that creates all of the rules surrounding flight in the USA.

If a paramotor exceeds these speeds, it no longer qualifies as an ultralight aircraft. It will therefore be subject to much greater scrutiny and much stricter flight rules. With all of that being said, achieving a speed of over 63 miles per hour with a paramotor is virtually impossible. Therefore, this is a rule that you generally don’t have to worry about.

What Determines How Fast a Paramotor Can Go?

Now that we know about how fast your average paramotor travels, let’s take a look at the main factors that determine the speed.

Some of the main factors include wind speed, paramotor wing type, the motor itself, rider weight, and more. Let’s take a closer look at each of these factors right now.

The number one factor that affects how fast a paramotor can travel is the wind speed. The fact of the matter is that the wind plays a huge role here. One thing to note is that paramotors always land and take off into the wind.

The main reason for this is because even a very slow wind can slow up paramotor down quite drastically. A headwind of around 25 miles per hour is enough to bring most paramotors to a complete stop. This is not to say that the paramotor will crash down to the ground, because there is still wind passing past the winds to create lift.

Therefore, before you start paramotoring on any given day, always check the weather first. You do want to plan your trip based on weather and wind speed. Now, wind speed is also related to elevation, so let’s move on and look at that point.

Another factor that is going to affect how fast a paramotor can travel is the elevation at which you are flying at. Yes, this does have to do with wind speed. This can actually be a bit complicated. An important point to take note of here is that close to the ground, wind speeds are usually much lower than they are higher up.

If you’re flying at 10,000 feet or higher, you can travel quite a bit faster than when you are lower. Of course, whether you are flying against the wind or with the wind is going to make a difference. With that being said, traveling at over 10,000 feet does generally allow you to travel faster.

There is much less turbulence between winds at those heights, as well as less friction between those winds. Moreover, at that height, jet stream speeds also tend to be quite powerful. If you use this to your advantage and use those jets streams as tailwinds, you can travel at significant speeds.

That said, if you are flying against the wind, then you can go faster if you are lower to the ground. This is because there will be less wind slowing you down compared to if you had a more powerful headwind higher up in the air.

The next factor that is going to determine how fast a paramotor can fly is the weight of the rider. Now, you might think that being heavier means that you will go slower. However, this is actually not the case.

Although we don’t really have time for a physics lesson here today, a heavier rider will generally travel faster than lighter riders. Sure, takeoff speed might be a bit slower if you are large and have a heavy paramotor. Yet, this won’t affect your overall airspeed once you are airborne.

This generally has to do with forward momentum. In terms of rider weight, however, do keep in mind that the average weight limit for these devices is somewhere over 350 pounds or 160 kilograms. The bottom line here however is that a 250 pound rider will travel faster than a 150 pound rider. 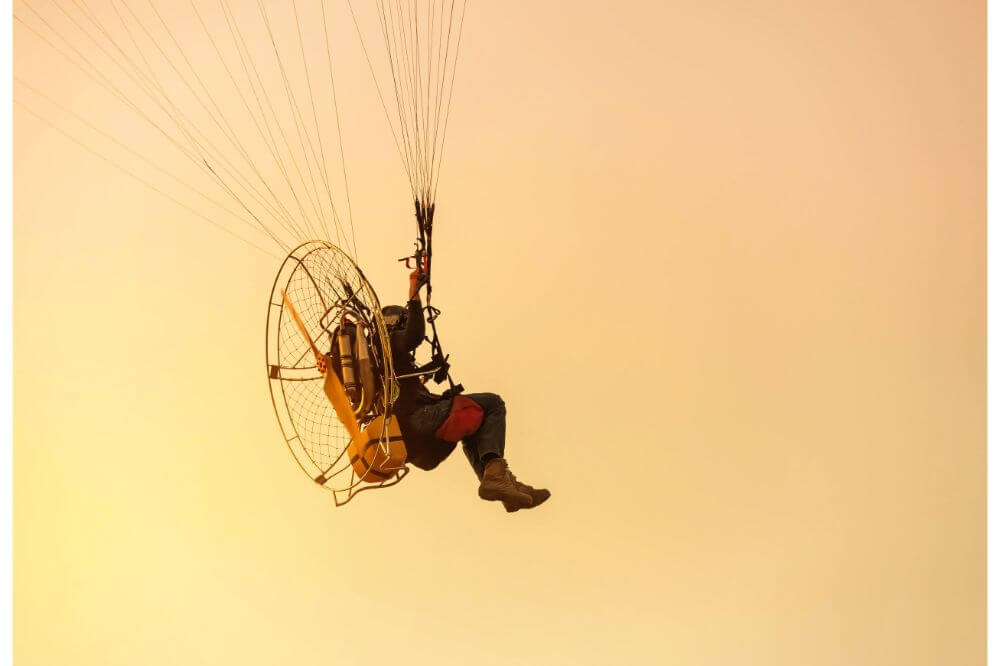 One of the biggest factors that determines how fast a paramotor can go is the type of wings that it has. There are a few different pairs of motor wing types out there, and they all have different top speeds.

One of the most important things to keep in mind here is that the bigger the focus on speed and maneuverability is, the faster the wing will be. With that said, the faster the wings are designed to be, the more skill is required to pilot them effectively.

Beginner-friendly paramotor wings will have a much lower aspect ratio, which means that they are slower. That said, slower wings are also more stable and less prone to being affected by turbulence. Classic paramotor wings should allow you to travel at around 30 mph with ease.

However, there are then also special reflex wings. Technically speaking, the reflex wing is designed to offload weight from the aft part of the wing and shift the pressure distribution forward. This does allow for much greater speed. In fact, this also helps to prevent wing collapse at higher speeds.

Yes, sometimes paramotor wings can collapse when they are traveling too fast. However, these reflex wings are specifically designed to prevent this from occurring. With the right kind of reflex wings, a paramotor can travel up to 8 or even 10 miles per hour faster than with classic wings.

The next factor that will determine how fast you can travel on a paramotor is the speed bar that yours comes with. The vast majority of paramotors out there do come with these speed bars. The speed bar is a special type of control mechanism that is attached to the harness and the risers, and then the wing.

This is a really good way for pilots to be able to manually control the speed of their paramotor. What is cool is that decreasing that angle of attack not only provides you with more air speed, but also makes the wings much stabler at high speeds.

The other thing that you need to consider here is the motor of the paramotor itself. One reason for this has to do with weight. As we have discussed above, as far as paramotors are concerned, being heavier generally means going faster.

Therefore, a larger and heavier motor should be able to travel faster than a smaller motor. This is definitely true. However, there is something else to consider here, which is motor power.

Yes, heavier motors and heavier people may travel faster, but they also require more force to propel. Therefore, the heavier you are and the heavier the motor is, the more power it needs.

As you can tell, both two-stroke and four-stroke engines are powered by good old gasoline. With that being said, there are also electric paramotor engines. However, electric engines usually don’t have good thrust, lasting power, or longevity. Sure, electric engines don’t require much maintenance, but they are slower and can’t go as far.

When it comes to flying at high speeds, it’s really not that dangerous. With that being said, turning at very high speeds can be dangerous. Sure, making really sharp turns can be fun, but it’s also quite risky. The reason for this has to do with the angle of attack of the wings.

The air has to travel under the wings instead of over them in order to achieve and maintain lift. However, if you make a really sharp turn, you will change the angle of attack for one side of your wings. If this angle of attack becomes far too sharp, the air can actually start to travel over the wing instead of under it.

The result here will be that the air will push down on the wing, and potentially cause it to collapse. Yes, a collapsed wing while using a paramotor motor is technically manageable, although it can result in accidents. Simply going forward at high speeds isn’t overly dangerous, although turning at high speeds is. This is especially the case if you are doing a sharp turn.

Going Too Slow on a Paramotor

Sure, you do need a little bit of wind under your wings to fly a paramotor. However, there is really no reason why you can’t fly at slow speeds. That said, there are some things that you do need to keep in mind here. One of the things that new paramotor pilots have trouble with is going too fast.

Going too fast can be a bit scary. For this reason, many will really pump those brakes. This can actually be quite dangerous. If you pump the brakes too hard, you might slow yourself down to the point where you stall. This stalling could cause the wings to collapse, which as you can tell, is not good.

You should now know everything there is to know about how fast a paramotor can go. Keep in mind that there are a variety of factors that will affect your overall top speed.

Are Side-by-Sides Street Legal in Missouri?