7 Of The Most Dangerous Hikes In America 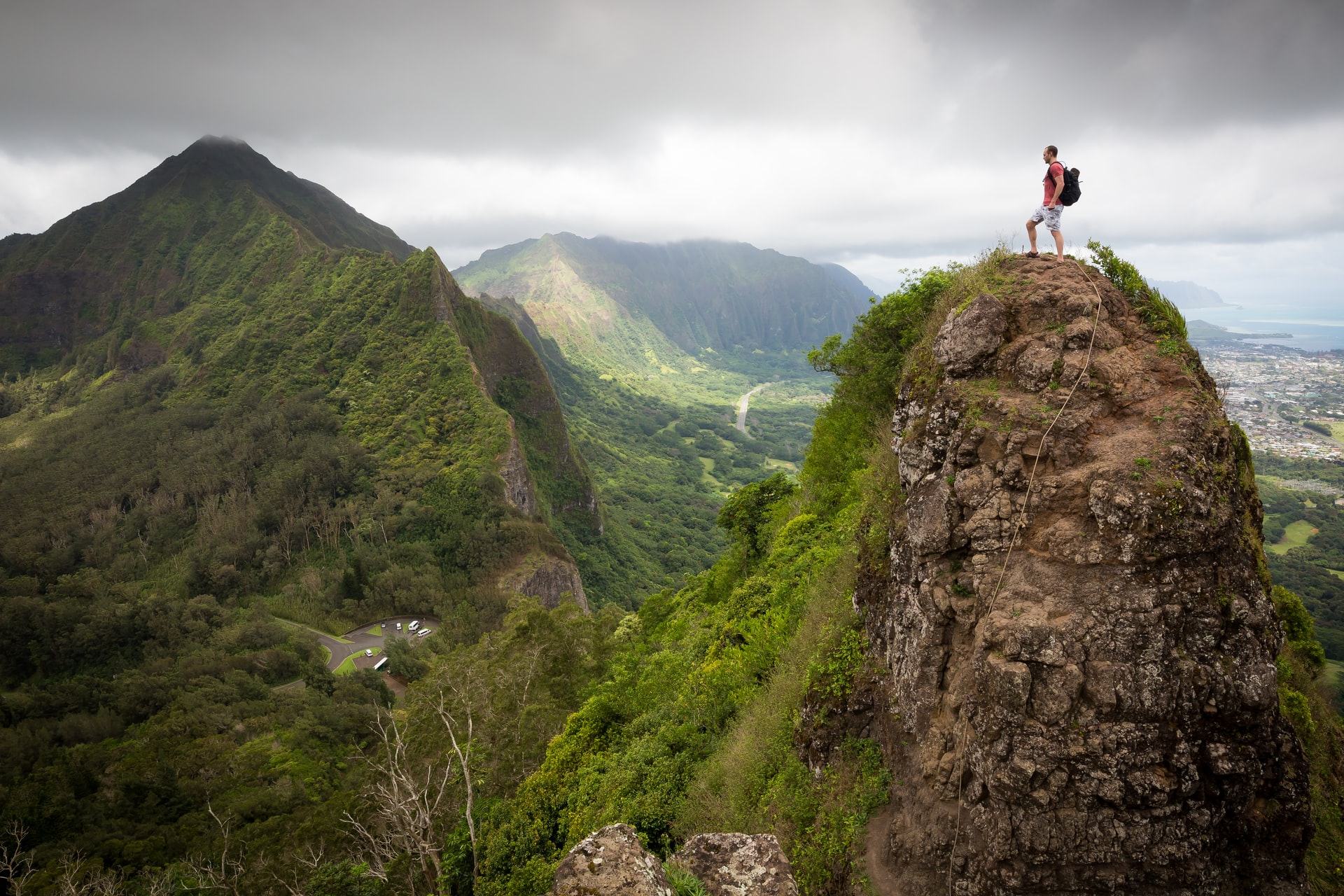 To many a visit in the great outdoors means a leisurely stroll along a well-maintained hiking trail at a nearby state park. For extreme adventurers, a simple hiking trail doesn’t get their heart racing and adrenaline pumping. Instead, they are on the lookout for intense and thrilling challenges that even the most seasoned outdoorsman is terrified to complete. If you are an extreme adventurer, look no further than these 7 dangerous hikes.

The Alaskan wilderness is a different beast in itself. It is remote, sprawling, frigid, and is truly wild. It’s populated by few humans but many large animals. Alaska is also home to the continent’s highest peak — an arduous journey to the top that involves hacking through bush and often treacherous wind and ice, and possible altitude sickness. The summit soars above the landscape at 20,000 feet high with endless amounts of wildlife along the way — including Black and Grizzly bears and moose among other creatures. Despite many successful journeys to the top, typically just over 50 percent of aspiring climbers actually make it to the top, and more than 100 have died trying to get there over the past century.

The Mist Trail can be found in world-renowned Yosemite National Park, attracting thousands of visitors each year daring enough to climb to Half Dome’s 8,836-foot-high peak. While the hike is beautiful, passing through beautiful pine forests and waterfalls, the final staircase that leads to the steel cables that will take you the last 400 vertical feet to the top of the dome have claimed the lives of six hikers since 1995.

Aside from death-defying heights, another danger that plagues the Mist Trail is the altitude change. Within four hours of the start of a journey to the summit of Half Dome, hikers can gain 1,463 vertical meters. Additionally during winter, spring, and fall seasons, rainfall makes rocks slippery and especially hazardous.

Leather gloves, a good pair of hiking boots, and being able to endure tough hiking conditions are requirements for anyone who takes on the Mist Trail.

The Maroon Bells, made up of Maroon Peak (14,156 feet) and North Maroon Peak (14,014 feet) is also referred to as “The Deadly Bells” in a U.S. Forest Service sign on the access trail, describing the “downsloping, loose, rotten and unstable” rock that “kills without warning.” As beautiful as the Bells may be, this is no place for a novice rock climber.

Located near Aspen, this location is said to feature the most photographed spot in Colorado. Many have died attempting to visit this popular location. Unlike other mountains in the Rockies that are composed of granite and limestone, the Bells are composed of metamorphic sedentary mudstone that has hardened into rock over millions of years. The mudstone is the source of the Bell’s distinctive maroon color. The Bells got their “deadly” name tacked on in 1985 when eight people died in five separate accidents.

HikingInTheRockies.com described the hike as a “long, dangerous, and very challenging mentally, physically, and technically.” They also said “this trail gets down to business. At this point we put the poles away and the helmets on.”

Danger even lies within the Maroon Bells campsite, where carbon monoxide poisoning killed a man and a boy in their tent just last month.

The Wave may be one of the most scenic hiking destinations in the entire Southwest, a destination so popular that officials use a lottery system to decide who gets to walk its trails. The Wave is also one of the most dangerous hikes in the entire United States, killing three hikers in just one month. Falling prey to triple-digit summer temperatures and often-confusing landscape along the Colorado plateau is to blame. The mesmerizing colored sandstone patterns also make it difficult to find the way, since there is no marked trail.

Officials only allow 20 hikers a day into the area — with more than 48,000 people applying in 2012 for the 7,300 available permits. The shortage of permits means that many have to succumb to the unfavorable elements and hike The Wave in the summer.

“This is not just a nice little stroll in the park on a hot day,” Bureau of Land Management spokesman Dennis Godfrey said about The Wave. “It’s a dangerous situation, and you better be prepared.”

While the Haiku Stairs have technically been closed to the public since 1987, thousands of hikers bend the rules and climb the steps to a perilous ridge, with steep cliffs on either side every year. The historic metal staircase was installed during World War II so military could access a radio station antennae 2,000 feet up the mountain. It is now considered illegal to hike up the 3,922 steps leading up to the stunning Puu Keahiakahoe summit. Security guards have even been enlisted to discourage hikers.

If you do dare to be a rebel, some of the hike’s scariest moments are faced early on, when you’re forced to climb a ladder vertically up a steep mountain. Soon after, the stairway takes you above the noisy highway below, and meanders along the ridgeline. Hikers have been reported missing on this hike, and Don Tiki show singer and comedian Fritz Hasenpusch died of a heart attack during his Haiku Stairs climb in August 2012.

With a recent storm over Valentine’s weekend, the Haiku Stairs, also known as The Stairway to Heaven, is now even more dangerous than ever. The narrow and steep steps are considered more treacherous than they were beforehand may possibly even be demolished. If the hike does cease to exist, hikers around the world will mourn the loss of one of America’s best illegal views.

Trekking from the rim of the Grand Canyon to the river (and back) is one of the planet’s most sought after journeys, prompting tourists worldwide to flock to this popular destination. The problem is, canyon temperatures routinely reach 110 degrees Fahrenheit in summer, and that scorching-hot heat combined with the exertion of climbing 4,380 vertical feet over 9.5 miles results in about 200 heat-related rescues each year, most of them on the Bright Angel Trail.

In fact, an influx in deaths 10 years ago prompted the creation of PSAR (Preventative Search and Rescue), a team of rangers that regularly patrols the Bright Angel Trail, assessing individual hikers, dispensing water to those in need, and urging the unprepared to seek safety.

While about 4.5 million people visit the Grand Canyon each year, an average of 12 people die there annually, according to park statistics. Much of the time this is attributed to medical issues, fatal falls, drowning, and heat exposure. Using data from Michael Ghiglieri and Thomas Myer’s encyclopedic account of canyon fatalities, “Over the Edge,” more people have died because of heat exposure and the environment in May, June, July and August. In other words, bring plenty of water and hike the Bright Angel Trail in the fall.

One of Colorado’s most popular peaks is also one of the deadliest, thanks to high exposure, rock slides, frequent lightning strikes, and narrow ledges. An average of one person dies each year on Longs Peak, and with a difficulty rating of Class 3, it lives up to the hype of being one of the most challenging standard routes up a 14er in the state.

The Longs Peak trail appears easy at first, until you reach a section known as the Keyhole. From there, hikers must scramble along narrow ledges, following painted bull’s-eyes to stay on track. While it isn’t technical climbing it’s easy for hikers to get lost.

Longs Peak has claimed the lives of many — perhaps the most famous was mountaineer Agnes Vaille. After she and a companion successfully submitted, Vaille fell 150 feet down a rock field. She froze to death by the time rescuers found her.

Between 1915, when Rocky Mountain became a national park, and 2010, a total of 344 park visitors have died as a result of accidents, car crashes, heart attacks and various other reasons. 60 of those fatalities were associated with climbing Longs Peak.

Outdoor Safety for Hiking and Camping

6 Ways To Motivate Children To Hike